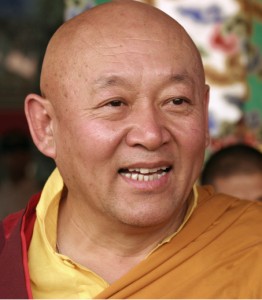 The oral transmission lineages, the Kagyu traditions of Tibetan Buddhism origin from Buddha Vajradhara and have been transmitted from Tilopa to Naropa, Marpa, Milarepa, Gampopa, Phagmo Drupa and Jugten Sumgon. The Drikung Kagyu Lineage keeps up an unbroken lineage for more than 850 years. The founder of the lineage is Kyobpa Jigten Sumgön (1143 – 1217), one of the heart disciples of Phagmo Drupa. Since these days 37 successors have taken repsonsibility fort he lineage. Today H.H. Drikung Kyabgön Chuntsang takes care of the lineage in Tibet and H.H. Drikung Kyabgön Chetsang has built up the seat in exile in Dhera Dun, India with the Drikung Kagyu Institute which actually includes an important Tibetan library (Songtsen Library), the Kagyu College and monastries for women and men. Link

After the severe breakdown of Tibetan culture during the Chinese cultural revolution with the destruction of many lives and goods for all Tibetan traditions the Drikung Kagyu Lineage is today a vital and flowerishing lineage that has integrated the actual changes in a modern world with the unbroken blessings of thousands of realised yogis and is active in practice with numerous centres worldwide.

According to the multitude of human habits it needs as many paths of liberation from these illusions. The crucial point for a fruitful result is an authentic transmission. In the Ri-Me tradition all methods are seen as equal. The are three central transmissions that are held in the Drikung Kagyu Lineage.

The first lineage is the Magnificent Blessing Realization lineage including the Fivefold Path to Mahamudra and the Six Yogas of Naropa  It was passed down from Vajradhara to Tilopa, Naropa, Marpa Lotsawa, Jetsun Milarepa, Lharje Gampopa, Phagmo Drupa and then to Lord Jigten Sumgon (the founder of Drikung Kagyu) until the present day lineage holders Chokyi Jugne (H.H Kyabgon Chuntsang Rinpoche) and Thrinle Lhundrub (H.H Kyabgon Chetsang Rinpoche).

Jetsün Gampopa had received the profound teachings, secret oral transmissions and blessings of all these three lineages which were then transmitted to Phagmo Drupa. Although Phagmo Drupa had a great community of disciples, Lord Jigten Sumgon was one of his closest and also the chief disciple. Phagmo Drupa had then prophesied that the teachings and blessings would be carried on by a Bodhisattva, Jigten Sumgon, who had already attained the tenth Bhumi. Jigten Sumgon hence received all the complete teachings, secret oral transmissions and blessings of all the three lineages from Phagmo Drupa and then gave all these teachings, including the Six Yogas of Naropa, to his chief disciple, Gurawa Tsultrim Dorje. These profound teachings, transmissions and blessings were passed down through all the great lineage masters to the present 36th lineage holder, His Holiness Drikung Kyabgon Chuntsang Rinpoche, and the 37th lineage holder, His Holiness Drikung Kyabgon Chetsang Rinpoche.

Through the 17th Drikung Kyobpa Rinchen Phuntsog the transmission of the Nyingma Terma and Dzogchen Tradition came to the Drikung Lineage and is transmitted until today.

Lord Jigten Sumgon prophesied among his disciples, “In the future, my teachings will flourish because of two Bodhisattvas, who are like the sun and the moon, through their compassion and wisdom.” His Holiness Chetsang Rinpoche is like the sun, the emanation of Chenrezig, the compassionate deity while His Holiness Chungtsang Rinpoche is like the moon, the emanation of Manjushri, the wisdom deity.